Glutinous Rice Ball Porridge or known in local as Bubur Candil is one of the popular Indonesian traditional desserts. In this delicious sweet porridge, the glutinous rice balls are served in thick brown sugar sauce mixed with coconut-milk sauce.

This is my entry for the current monthly event 'Masak Bareng Yuk'. The theme for this month is 'Jajanan Pasar berbahan dasar Beras' (traditional snack/dessert with rice* as the main ingredient). When we talk about Jajanan Pasar (Pasar means Market), it refers to traditional Indonesian snacks/desserts that usually can be found easily in traditional markets or local bakeries. Most of Indonesians are familiar to these kind of snacks/desserts from generation to generation. I don't mean we know all kind of traditional snacks/desserts from any places, but normally we're familiar with the food which come from our original place or from the place where we live or used to live. However some famous traditional food are known and popular almost all around the country.
Bubur Candil is one of the desserts that is very popular and easy to be found in Java island. I was made familiar with this porridge while I spent my high school and university in Bandung, West Java. During one fasting month of Ramadan, I found an old man selling this food in front of Pasar Balubur, a local traditional market in north of Bandung. The special thing which made me interested was that we could mix this porridge with other different sweet porridge.
Here in India, I couldn't find glutinous rice or glutinous rice flour. I have to bring that ingredient from Indonesia :). Unfortunatelly, I don't have 'gula jawa' (Indonesian popular brown sugar made from a specific palm tree) that is required. I substitute it with golden sugar organic. And, your guess is right; the authentic flavour of Bubur Candil is not there, but it's still acceptable. 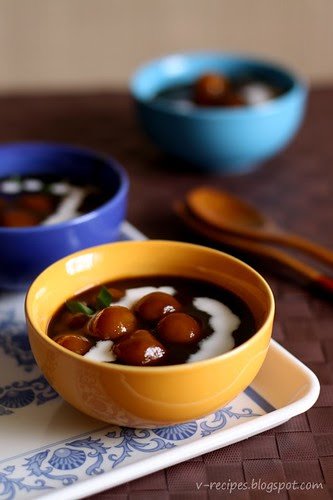 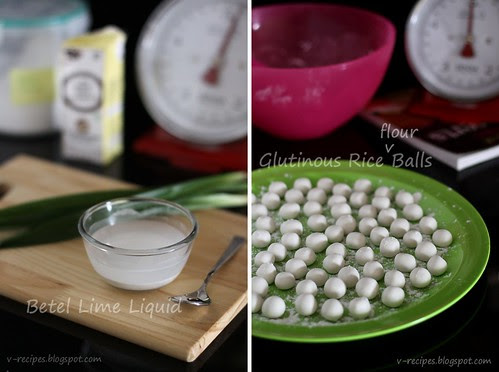 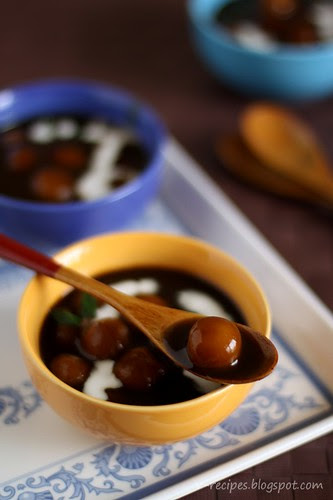 Special thanks for the trio host 'Ayin, Dheeta, Shinta', who make this event very interesting.